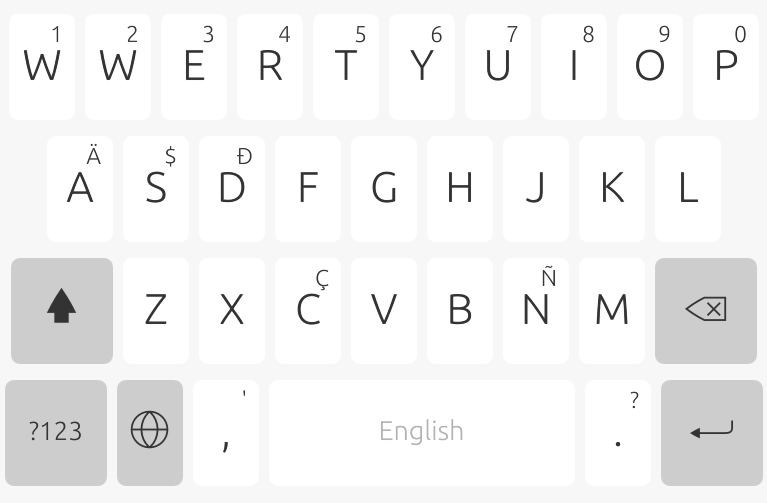 Or, how to mess with a perfectly working keyboard. Where is the Q, by the way? ?

Before making any new layout, I should first get the relevant source code and see if I can compile the package as it is, and to install the compiled package to see it in action. A quick search for “Ubuntu touch keyboard layout” landed me on this AskUbuntnu exchange, which in turn pointed me to this very useful page about keyboard layouts in the Ubuntu wiki.

The keyboard in Ubuntu touch comes from a package called ubuntu-keyboard and is hosted on Launchpad. I downloaded the repository for this package by running

Layouts for different languages are defined as plugins to the ubuntu-keyboard package. For example, the English layout is defined in

From the above, files with qml suffix define key arrangements. Each of these layout variants have keys specific to their use case. For example the email layout (Keyboard_en_email.qml) has a dedicated “@” key to make it easier to type email addresses.

I had no idea how to compile the ubuntnu-keyboard package. So I wrote to Mike Sheldon, an Ubuntu developer who has done many recent commits to this package. He nicely helped with the following compile recipe. Thank you Mike!

1. Start a shell session on the device: phablet-shell

4. Checkout your branch on the device: 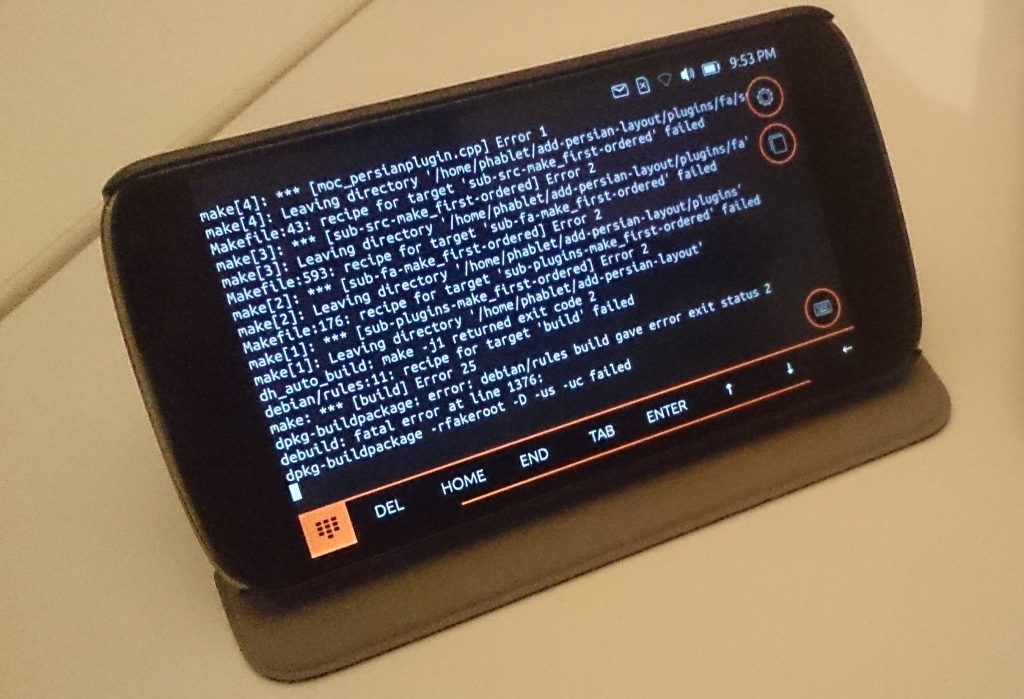 5. Run “debuild” in the root of your source checkout, this will build all the packages and place them in the directory above your source directory

7. As this also installs the autopilot tests the first time around you’ll need to also run:

I did all of the above successfully on my Nexus 4. To make sure everything has actually worked, I replaced the key for “Q” and changed it to “W”. This change does show up in the keyboard, as you can see from the image at the top of this post.

I had problems with installing the development tools (step 3 above): packages failed to install due to insufficient storage in the root partition of my Nexus 4. I uninstalled many apps to free some space. At the end, I had to completely wipe the phone and install a fresh Ubuntu image. Even more, I had to also delete some not-crucially-needed system directories

This is a terrible thing to do on a production system. But since I use the Nexus 4 only for development, it just provided me with the much needed free space to install dev tools.

Difficulty in editing files on the phone

Since editing any text file on the phone is very difficult, I did all the actual edits on my desktop machine, synced  it to my ownCloud instance, and downloaded the edited files via wget.

Each compile takes about 45 minutes to complete. During compilation, if I switch out of the terminal app, or if the phone is locked after a few minutes of inactivity, the compile process is stopped by the OS. I assume this is done to all app in order to save power. To prevent this, I disabled screen locking in Setting -> Security and Privacy -> Locking and unlocking.

In the next posts, I will continue to document my work on making a Persian layout for Ubuntu phone. Meanwhile, I’d love to hear your comments. If you are expert in Ubuntu touch development, do you see something that I am doing wrong or inefficient? If you are an Ubuntu phone end user, do you need a particular keyboard layout to be added or fixed?